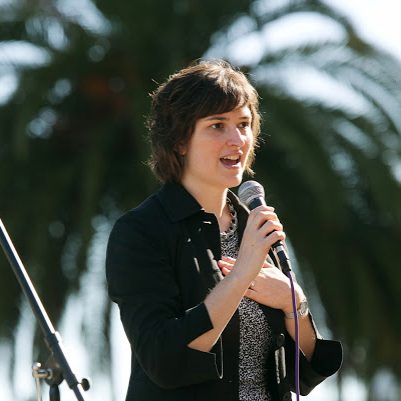 Sandra came to national attention in 2012 when she testified before members of Congress regarding comprehensive insurance coverage for birth control. She then took on Rush Limbaugh and other conservative commentators when they made personal and sexist attacks against her. As the media attention and the personal attacks grew, Sandra believed it was her responsibility to use the microphone she was given to advance the policies she has always fought for.

Sandra has lived and worked in California for years, building coalitions, advocating for legislation, and securing the passage of bills that will change lives for the better. Now, Sandra wants to continue her work as a leading voice for some of our most vulnerable groups who are too often silenced by serving as a State Senator. She has the legislative experience to hit the ground running but isn’t a career politician beholden to special interests.  That’s why she can effectively create change in Sacramento and fight for her community.

Growing up in a middle class family shaped Sandra’s perspective on jobs, education, veterans’ issues and economic security. Her father worked in manufacturing and saw plants open and close, union jobs come and go, for decades, and her mother works in a public school as a teacher and guidance counselor. Sandra’s grandfathers served in the Army, one in Korea and one in World War II, and her grandmother was a parachute packer in World War II. Because Sandra’s family was willing to make sacrifices for her, she was the first person in her dad's family to earn a bachelor's degree.

While nationally recognized for her work on gender equality and reproductive justice, those are far from the only issues Sandra has advocated for. She has fought for a myriad of progressive issues to improve the lives of others, including helping pass legislation ending discrimination against LGBTQ folks in family court. In 2010, funded by the Women Lawyers Association of Los Angeles, Sandra developed materials to help victims of domestic violence obtain restraining orders in LA courts and represented those victims at Neighborhood Legal Services of Los Angeles. For more than two years, Sandra worked with a grassroots coalition to pass the California Domestic Worker Bill of Rights, which was signed into law by Governor Brown in 2013 and is designed to ensure domestic workers have the same protections that other workers enjoy.  At the Coalition to Abolish Slavery and Trafficking in Los Angeles, Sandra is one of the longest running volunteer attorneys representing victims of human trafficking. She has advocated for student loan debt relief, access to early childhood education and for raising the minimum wage.

Nationally, Sandra is frequently recognized for her powerful address to the Democratic National Convention in 2012.  She served as a surrogate for President Obama in his reelection, and she campaigned for more than a dozen Democrats running in competitive U.S. House and Senate races, including U. S. Representatives Bera, Brownley, Capps, Peters and Ruiz of California and Senator Elizabeth Warren of Massachusetts.